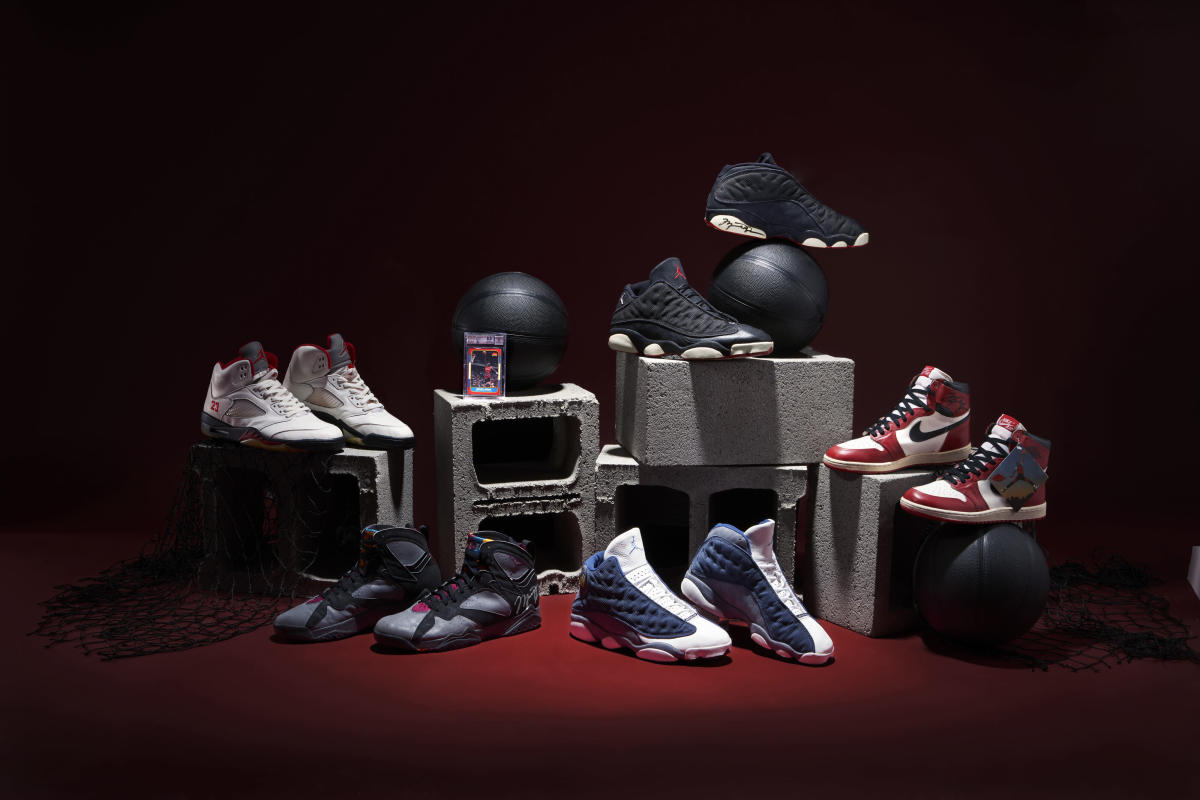 Christie’s on Tuesday closed its online sale “Six Rings – Legacy of the GOAT” dedicated to the career of Michael Jordan.

The auction, consisting of six lots representing key moments in Jordan’s illustrious career, began June 1 and closed with 100% sales and brought in nearly $1.49 million in sales.

Sneaker and streetwear specialist Caitlin Donovan and rare sneaker collector Gerard Starkey hosted the sale. The selection included five game-worn and/or dual-signature Air Jordan sneakers and an Upper Deck trading card worth an estimated $3 million. A 1909 T206 Honus Wagner baseball trading card still holds the record for the most expensive trading card at $6.6 million, and the Nike Air Yeezy 1 prototype holds the record for the most expensive pair of sneakers sold for $1.8 million.

“The strength of the sneaker and sporting collectibles market is demonstrated by the results of this sale, which reached 100% sale per lot and the best-selling lot for over $1 million,” said Donovan. “In this new market for Christie’s, we have seen tremendous interest from new and existing customers, with every lot being auctioned within 24 hours of the auction opening. We see great potential for this category at Christie’s, and look forward to building on the success of this inaugural stand-alone auction and expanding further in this space.

Starkey explained the importance and rarity of each batch. For example, the dual-signature Air Jordan 1 “Chicago” sneakers have “two correct signatures from Jordan’s era,” Starkey said, and they’re considered extremely rare among collectors.

The Air Jordan V “Fire Red” sneakers nod to the pair Jordan wore when he scored the most points of his career. This pair has a restored midsole so the collector can handle the pair without it falling apart.

The “Bordeaux” Air Jordan VII sneakers were never worn in an official NBA game due to uniform rules, but were worn for the 1992 All-Star Game. Starkey added that Jordan wore a version of these sneakers alongside Michael Jackson in the singer’s music video for Jam on his eighth studio album, “Dangerous.”

The “Flint” XIII sneakers were specially designed for Jordan during his last season with the Chicago Bulls. Starkey said, “In my 25 years of collecting, this is the third pair I’ve seen,” adding that the pair have tags indicating their purpose and rare materials no longer used in the production of the sneaker. .

And finally, the sneaker with the highest estimate, the game-worn, dual-signature, player-exclusive Air Jordan XIII sneakers, are one of the last pairs of sneakers Jordan played against the Chicago Bulls in the NBA Finals in 1998. Starkey said Jordan wore this pair – which featured prominently in the documentary “The Last Dance” – in the first half of Game 5, and switched to another pair for the second half.

“To try to figure out the provenance, you need to know the details of how it got into someone’s hands,” Starkey explained. “Jordan was more likely to give things away if you did something for him. An auto mechanic who was a very important mechanic for the Bulls received several pairs of these playoffs, but that’s how you feel about checking these things.

Starkey received his first pair of Jordan sneakers, the Jordan VI “Carmine”, as a teenager and has continued to collect them ever since. “Items weren’t fully understood and I saw a role for me in helping collectors buy and find items and helping people appreciate things more than they really are.”

And Christie’s is doing something similar with this auction, which also marks the start of a new department for the company that focuses on sneakers and streetwear.

“With all new departments, there’s a lot of trial and error at the start,” explained Donovan, who was a collector herself as a child. “I want this department to shine a new light on Christie’s and be something that excites new collectors, from announcements to events and education. Sneaker collectors are so advanced and well versed in buying from the secondary market. We want to bring that in and give it our own Christie’s touch.

Donovan was hired nine years ago to start Christie’s handbags and accessories department. After Louis Vuitton and Supreme launched their collaboration, she got the idea to try selling these items in a handbag auction, and they sold for more than primary market value.

“I give a lot of credit to Virgil Abloh and Kim Jones, bringing streetwear into the worlds of high fashion,” Donovan said. “Following where the luxury was going, it was time to follow.”

These auctions follow the long-established trend that non-traditional items are considered assets. Sneakers and sports memorabilia were not seen as high-value assets compared to original artwork, vintage cars and vintage watches, but collector communities around sneakers and memorabilia show the high demand for these items – and what people are willing to spend on them.

“I’m so proud of this inaugural sale and what will be the standalone department,” Donovan said. “What’s so exciting and cool about this department is that sneakers and streetwear don’t do it justice. You can do so many things that play with culture, sneakers, artist collaborations. My ideas are endless. I think it’s going to constantly evolve with what’s happening in fashion and luxury around the world.

FOR MORE ABOUT CHRISTIE’S ON WWD.COM, SEE:

Christie’s focuses on jewelry and handbags

Fashionphile, the Christie’s team at a New York-inspired handbag auction