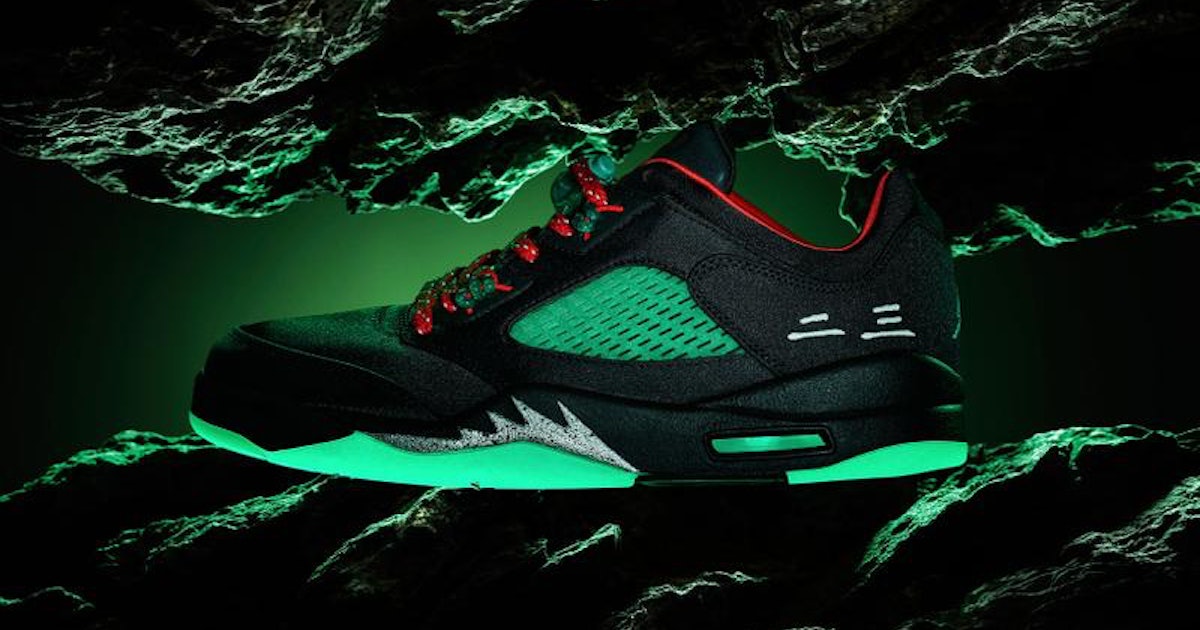 Clot has teamed up with Nike once again to create a glow-in-the-dark sneaker. After its previous (equally futuristic) Dunk, the Hong Kong label plans to release its own version of the Air Jordan 5 Low. Green “Jade” detailing throughout the shoe celebrates the brand’s Chinese roots – but the color scheme is also a lookalike for the Nike Air Yeezy 1 “Blink” and Air Yeezy 2 “Solar Red”.

“Jade is a prized symbol of China not only for its beauty and durability, but also for its artistry,” Clot said in his announcement. The brand’s founder and creative director, Edison Chen, added to this sentiment: “[Jade is] heritage and tradition steeped in grandeur. A truly shining example of the essence of a Clot x Jordan Brand collaboration.

Extravagant kicks — Black satin has been elegantly draped over the upper, contrasted with bold red laces, lining and piping. The red details refer to the red strings often worn with jade accessories and are therefore accentuated by jade-inspired embellishments and beads on the sides of the laces.

Beneath the black satin upper is the cage, which in the light appears yellowed but glows in the dark. The same effect has been applied to the outsole of the shoe, while matching embroidery towards the heel of the shoe depicts the number “23” in Chinese characters.

Quite an adjustment — To go along with the elevated Jordan 5, Clot and Jordan Brand have also made apparel. A matching hoodie and tracksuit pant set features a design including both labels’ branding, all decked out in mint green. Red laces and jade-inspired embellishments elevate the pieces beyond your typical tracksuit.

A t-shirt completes the collection, sporting a design more suited to the AJ5. Neckline graphics give the illusion of multiple jade necklaces, with designs from Clot, Nike, Jordan Brand and Air Jordan making up the charms.

The full collection, including Clot’s Air Jordan 5 Low, will be released on the Juicestore website on May 14 – but there may be a chance to grab the celebratory sneaker sooner. A raffle for the collaboration will open on May 10 and run through May 12 via the same website, giving sneakerheads the chance to land a pair of kicks before anyone else. Sweepstakes winners will still have to pay the retail price of the AJ5 – a $200 fee – but that cost surely rivals the inevitable markup prices of the resale market. And even that price is a pittance compared to what Air Yeezys are selling today.