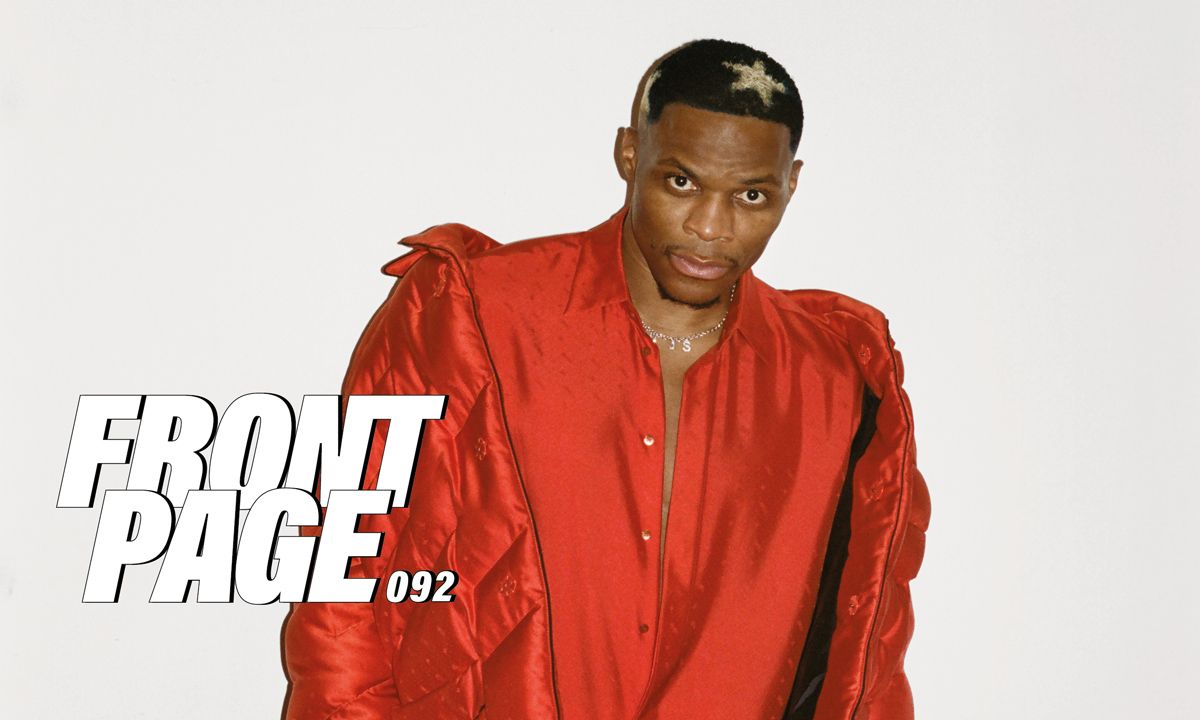 In this FRONTPAGE interview, we caught up with NBA star (and rising fashion icon) Russell Westbrook, an athlete who has had a surreal year.

It’s late September, and NBA player Russell Westbrook has just completed the Los Angeles Lakers’ media day’s drive home from El Segundo to his home in quiet Brentwood. â€œI know which streets to take, which streets not to take, what time to go. I’m not stuck in traffic, â€he says speaking on the phone from inside his kitchen. (Her cold, monotonous responses are punctuated with what looks like put away dishes.) “I know my way around this place.”

The place, of course, being Los Angeles, Westbrook’s hometown. Born in Long Beach (about half an hour away, in good traffic), the 32-year-old has just returned home, on the career side, to play for the Lakers, alongside LeBron James and Anthony Davis. The biggest difference so far? “I can now play in the Lakers’ training center,” Westbrook said. â€œIt’s pretty normal for me; I’m still in LA during the summer. Honestly, it hasn’t even touched me yet. Maybe the night of the opening.

The last 13 years of Westbrook’s NBA career have been spent in pockets of America that most of the incredibly wealthy people in Southern California would pay to avoid: Oklahoma City, Houston and, most recently, Washington DC. His stint playing in the nation’s capital, for the Wizards, was marked by a team-wide Covid epidemic, resulting in six postponed games – not to mention the violent day of insurgency on Capitol Hill in early January, resulting in a locked-down metropolis that Westbrook never really got to see beyond a handful of landmarks, like the Martin Luther King Memorial. (â€œI love it because it’s inspiring and it’s so well designedâ€¦ it’s impactful for me,â€ he says.)

Despite the Wizards’ tough times of the season, the team has returned from one of the worst in the league to a shocking playoff appearance. The turnaround was largely attributed to Westbrook, who at the start of the season promised his teammates they would make the playoffs. Shortly after, in May, the playmaker broke Oscar Robertson’s triple-double record in 1974, once one of the league’s most touted achievements. Westbrook described the year as “incredibly special” which appeared to be a hallmark underselling. He also didn’t seem to miss the neighborhood after such a surreal period. â€œThere weren’t a lot of places to go to see everyone’s swagger,â€ he adds. â€œEven for myself, I haven’t had the opportunity to dress; I haven’t really had a full experience.

One of Westbrook’s main concerns is the Swagger style. In October, his streetwear brand Honor the Gift released their latest Inner City Love collection, mostly inspired by ‘old school Motown days’. The pieces have a look that’s not quite Motown, but something generally nostalgic: ringing t-shirts, patterned paintings in loose fits, chunky-knit rope sweaters. His contribution to each collection ranges from â€œtop to bottomâ€, which he describes as everything, â€œvibes of the colors, the silhouettes, the way the lookbook is actually shotâ€. Recently, at the premiere of an upcoming Westbrook life documentary produced by Westbrook, he wore a faded Inner City Life t-shirt that said “4 The Inner City” across his chest. It was a Los Angeles look, Westbrook explains: â€œI’m the real West Coast, I understand Los Angeles fashion. When I say LA, I think of Dickies. Mandrels. Nike Cortez. This is right where I am, you know?

The ‘West Coast’ look Westbrook wore to his premiere was modest compared to the cuts seen on him just two weeks before our call, while he was in New York walking around during fashion week – first with gatorade blue hair at the Thom Browne show (which he attended in a long, pleated skirt), and days later with stars painted in his hair for the Met Gala. Normally, NBA athletes (the really good ones) can’t attend the gala held every May, due to the playoffs, but this year’s postponed event saw Westbrook attend for the very first time. â€œI had the opportunity to be able to have conversations with different people in different areas of work, so it was a good experience,â€ he said of the celebrity hyper-event.

Gala co-chair Anna Wintour was seen at certain times during fashion week talking at length with Westbrook. â€œWe have amazing conversations,â€ he shares. “I am really grateful to have this relationship.” Their conversations were mostly about “normal little things,” like tennis, basketball and their families, although Westbrook seems optimistic that he convinced her to come to an NBA game at some point in the week. coming season. Unlike the weaker ones among us, he didn’t find her intimidating – not shocking, perhaps, to a six-foot-three athlete. â€œI think that’s something we have in common. People see me and find me intimidating too. People call her intimidating, but I see her doing what she loves.

Westbrook never quite escapes the thought during the call, although the background noise does. While he quickly agrees with my previous statement that he and Wintour could be, well, intimidating, Westbrook begins to describe this as a ‘misconception’ of who he is, one that has followed him all his life. life. â€œLike you said I’m intimidating, you’ve probably never seen or met me before, or actually know if I’m intimidating or not. People who really know me say to me, ‘Well, actually, he doesn’t even bully me. He’s actually a really, really nice guy.