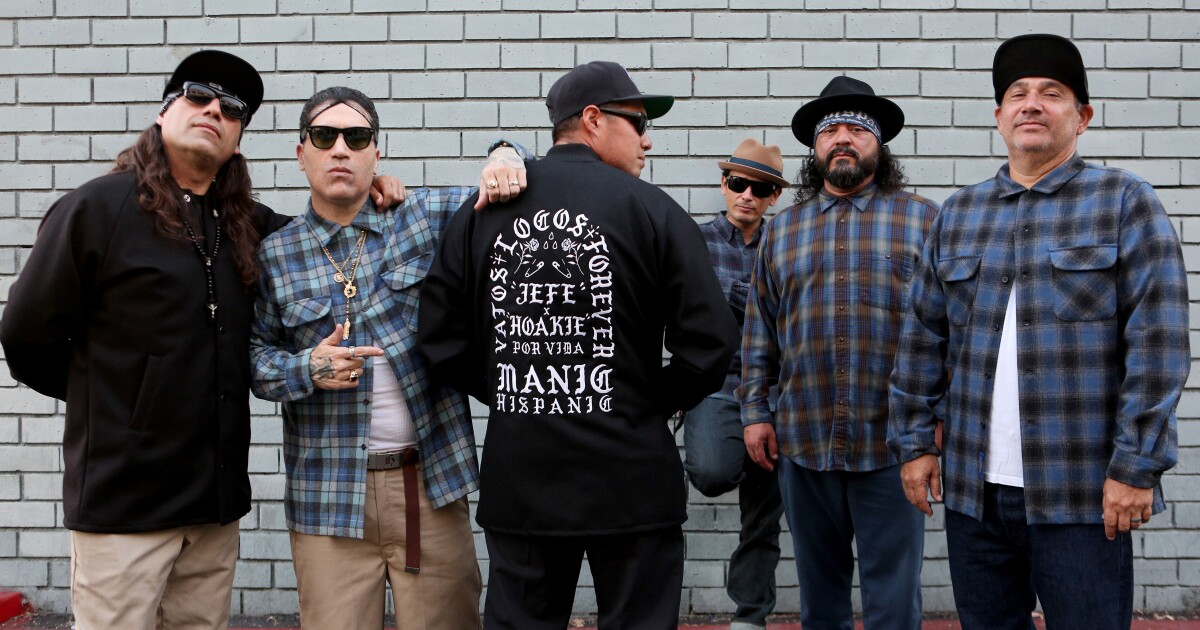 Call Manic Hispanic one of the most subversive groups to ever emerge in Orange County, and its members might just laugh at the suggestion.

The band’s origin story began with a half-serious conversation in 1992, after all, between founding members Steve Soto and Mike “Gabby” Gaborno while they both worked at the warehouse of Doctor Dream Records. in Orange. The pair reflected on what forming a Freddy Fender cover band would feel like a shared reverence from the beloved Tex-Mex ballader.

Around this time, Soto established himself on the OC punk scene as a member of Agent Orange and the Adolescents; Gaborno honed his charisma on stage as lead singer of the Cadillac Tramps. Like star players of a great team, they selected musicians from other groups to form Manic Hispanic, a project that did not usurp the Chicano crooners but the classics of punk rock.

Manic Hispanic rocked the assimilation with fried songs like “The INS Took My Novia Away”, inspired by the Ramones, which were as funny as they were furious. And the band did it all while dressed as cholos on stage. The group released four albums and turned the annual Cinco de Mayo shows into rituals where the county’s Mexican misfits danced with sweaty whites in solidarity.

No matter how awe-inspiring Manic Hispanic’s powder keg for nearly 30 years, the formula has remained simple: a bunch of brothers having fun playing music together.

This is why the tragic passing of Gaborno and Soto over the successive years has shocked the group’s steadfast sense of self.

“After Gabby died we weren’t sure what we were going to do,” said Maurice Torres, longtime guitarist with Manic Hispanic, “but then we decided to continue. From that point on, we just wanted to do it the right way. “

Manic Hispanic dropped the role of “Mexican Society,” a one-off parody after Gaborno’s death in 2017, and revamped the roster with the youthful additions of Gilbert Pichardo and Louie Perez III.

“Steve wanted the idea and legacy of Manic Hispanic to continue,” said Perez. “As he said in his famous analogy, if the grandmother dies before Christmas, the tía has to step in and make the tamales.”

Plunge their hands back into the musical masa, Manic Hispanic has tweaked new punk parodies that would end up composing his next album “Back in Brown” before Soto’s death in 2018, a year after Gaborno’s death.

“For a long time, thinking about the band made me sad,” said Efrem Martinez Schulz, frontman of Manic Hispanic. “I couldn’t even hear the songs. It would make me so disappointed.

After three decades of turning punk standards into laughing Chicano cult classics, Manic Hispanic has sat down on an album’s worth in unease, including Soto’s latest guitar recordings throughout the songs. .

Even if the band hadn’t found the will to play, not releasing “Back in Brown” would have been a betrayal. After mourning the loss of Soto, the remaining members renewed their resolve to return to the stage with the new album in tow. Adding guitarist Elvis Cortez to the fray, Manic Hispanic prepared “Back in Brown” for its long-awaited release last year on Cinco de Mayo only to see such plans dashed by the coronavirus pandemic.

More than a year later, live music is finally coming back just like Manic Hispanic without further ado.

The band celebrated this Cinco de Mayo with the debut of a music video for “Detention cell”, A cover of“ Waiting Room ”by Fugazi which serves as an edifying tale of barrio uprisings against police profiling, all with a resounding band gag of an interlude. Other videos followed for songs that draw on the same centuries-old tradition of Chicano musical parodies from Lalo Guerrero to El Vez.

As Mexico’s Independence Day approaches, Manic Hispanic is about to play a “Back in Brown” album release concert at Alex’s Bar on September 16th. “It’s always been about performing live and connecting with an audience with this band,” Torres said. “Plus, I got a new Pendleton just before COVID, and I have to wear it!”

No one is invited to fill Gaborno’s Nike Cortez shoes on stage that night or replace Soto’s own imprint on the band.

Both legacies will be honored as a new one begins; “Back in Brown” is Manic Hispanic’s debut album since 2005’s “Grupo Sexo” and the creatively renewed musicians don’t anticipate another long hiatus from the recording studio.

Drummer Ruben Rivera and bassist Warren Renfrow, who also performed with Gaborno in the Cadillac Tramps, join Torres as the remaining original members of the group. Manic Hispanic is reassured to know that the new additions are musicians the two deceased legends wanted to accompany on the cruise.

“When we started this group, Gabby was the focal point,” Torres said. “The difference now is that it’s a bit more of a team. The three of us – Gilbert, Efrem and Louie – interacting together has been amazing. I laugh so much when we play now.

Soto already had a few jokes for the vocal trio calling them “Juan Direction”, among other imprinted nicknames. After all the sorrow of the past few years, a little vato loco the lightness tuned to punk can be cathartic for the band and the audience.

“The beauty of comedy and tragedy is a very Latin thing,” Perez said. “You can’t call anything more Chicano than that. You laugh and you cry. The audience also went through all of this for a year and a half just being miserable or losing their minds. comrades. Now we have to bring them some happiness.

Or as Schulz summed it up with age-old barrio wisdom: “All songs make me smile now. They don’t make me cry anymore.

Support our coverage by becoming a digital subscriber.