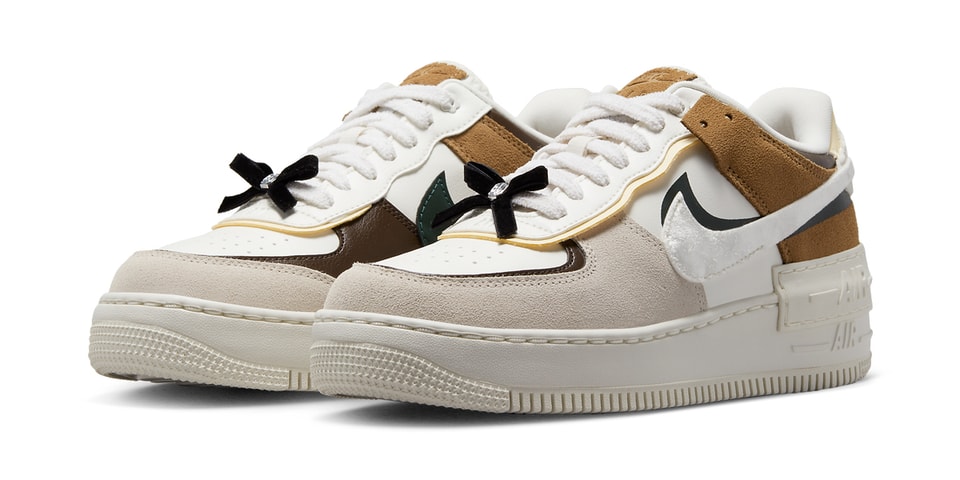 and its long list of designers and collaborators have outfitted the Air Force 1 with countless looks. Whether it’s covering the silhouette in Louis Vuitton details, introducing a new take on the model, or combining it entirely with another sneaker, there’s no shortage of redesign approaches for the Air Force 1. First appearing in 2019, the Nike Air Force 1 Shadow is a staple of Nike’s annual women’s shoe offerings.

Now, the layered version of the Air Force 1 Low finds itself dressed in black bow ties at the dubrae. While this inclusion immediately stands out, the sneaker’s mixed material, layered upper is not something to ignore. White leather serves as the base layer of the upper, while Taupe and Golden Brown suede overlays are complemented with Chocolate Brown leather detailing. Velvet serves as the material of choice for the White side Swoosh and heel while a Forest Green leather Swoosh sits inside. Finally, the standard Air Force 1 sole unit arrives in White with the model’s signature added on the midsole to complete the look.

Look for this feminine colorway of the Nike Air Force 1 Shadow to release in the coming months via the comma and select retailers at an expected price of $130.

In case you missed it, the OG Nike Air Flight Huarache should be available again in 2023.