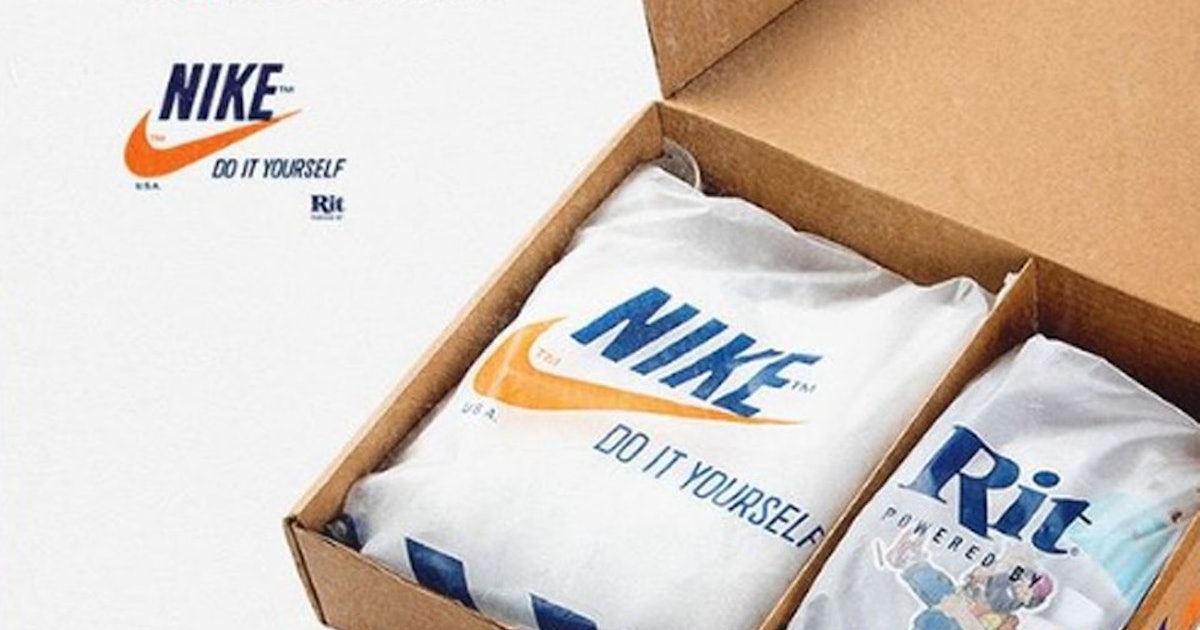 Amid a crackdown on customizing its products, Nike has teamed up with Rit Dye to introduce do-it-yourself tie-dye sweatshirt kits. Each kit comes with either a men’s or women’s Nike fleece sweatshirt, two official Nike iron-on patches and two bottles of Rit Dye. Tie-dye tools such as resealable pouches, gloves, rubber bands, and squeeze bottles are also included to better help people customize their sweatshirts.

Demand for customizable fashion has swelled in recent months as consumers seek out products made specifically for them. One-of-a-kind items lend a sense of individuality and creativity to their wearer, especially if the pieces include an element of DIY like Nike does. In fact, the brand’s “By You” customization program has been known to sell out in seconds, and it wouldn’t be surprising to see the same hype surrounding its tie-dye kits.

Tincture for — From the looks of the promotional photos, Nike’s kits come with yellow and blue Rit Dye, allowing people to create a design with both colors or mix them together to create a green hue. The package comes with instructions that show consumers how to dye their sweatshirts in three different patterns described as Sunburst, Diagonal, or Yin and Yang, but people can still create their own patterns if they wish. Two resealable pouches, gloves, rubber bands and squeeze bottles are included to help with the dyeing process.

After dyeing, bespoke designs can be further personalized with two official Nike iron-on patches. One shows a Swoosh smiley face logo wearing a Swoosh-embellished bucket hat, while the other features a waving hiker wearing a Swoosh baseball cap and Cortez sneakers.

Limited quantities available — Rather than subjecting customers to the chaos of its “By You” customization program, Nike and Rit’s tie-dye kits will be released August 31 via SNKRS. People will have to choose whether they want a men’s or women’s fleece sweatshirt before entering a raffle to win a chance to purchase the customizable product. A price has yet to be announced, but customers should expect the kits to sell for a bit above the average sweatshirt price of $65.

As mentioned earlier, Nike’s customizable products sell out quickly, in part because the brand doesn’t offer custom items as often as others. It has also become more difficult to find bespoke Nike items on the market, as the brand has taken a newly aggressive stance against customs: so far, it has handed out cease-and-desist orders and lawsuits. court cases to designers such as John Geiger and Warren Lotas. as little creators customizing Air Force 1s.

Yet Nike says “it has no desire to limit the individual expression of creatives and artisans, many of whom are among the [the brand’s] biggest fans,” and he doubles down on his message with his Rit Dye kits. Obviously, the brand does not want to limit the customization of its products, as long as they are purchased directly from the source.