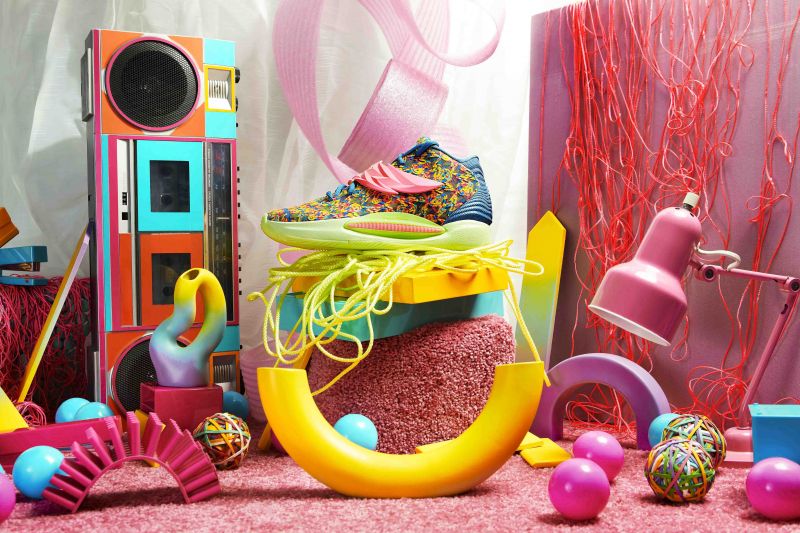 But it goes beyond a simple homage to the Nike classics; it’s a personal project inspired by the design of each sneaker, technological advancements, global warming and topics related to nature, as well as social and political issues and, of course, sport. “It is a project shot as an essay to reflect on current issues, cultural trends, as well as moments in human history, told through stylized images of Nike shoes”, Aldo says Creative Boom.

The idea of ​​the still life series was to tell stories through materials and objects. Why Nike? “I’ve always been a huge fan of Nike for the graphic look of their clothes and the way they blend fashion, streetwear and sport. I had the original idea of ​​staging different moments of history through sneakers, such as the moon landing or the fall of the Berlin Wall, so I came back to this idea and I mixed it with the vision of the “funky” sets that I had.

“I started imagining those moments in history and thinking about the sneakers people would wear at those events. Some styles felt more retro, others more modern or futuristic, some spoke to me more in terms of material or texture, others in color palette and a little more on an ideology.

“It was difficult to choose because there are hundreds of styles. I could have made 100 more sets! I decided to go with Nike shoes because of the iconography. I wanted to use an icon that everyone knows and that has been used in pop culture to draw attention to different topics and make it a tribute to the swoosh. I love the look of the swoosh in different types of shoes and the fact that it exists many different styles and colors, but they’re all united by this single icon. “

In Greenhouse, for example, Aldo was inspired by global warming and the idea behind nature and natural disasters to be the most powerful “species” on the planet. “The idea was to combine industrial materials to give us an idea of ​​a post-apocalyptic greenhouse where the Earth has regenerated and nature has invaded our man-made landscapes,” says Aldo.

Along with another style photo titled Space, the photograph references the stars and the universe, the Cold War era, and the advancements that have taken place since the moon landing. “It’s also a glimpse into what future life might look like and the current ‘space race’ between large companies,” says Aldo.

There are also lighter parts. The ’80s take inspiration from Aldo’s year of birth, 1986 – the very essence of that decade: “We’re talking about pop culture, the analog world, mixtapes and the vibrant retro colors of the era.” he said. “I wanted to create a tribute to an iconic era.”

Aldo worked with his creative partner Salvador Chacon to create the sets. “I had the original vision and the materials I wanted to use for each set, I wanted to use a lot of found objects or things that could be found in our daily life for each set, and I also wanted to have each set with a color palette that was unique to each shoe.

“We ended up renting accessories from accessory stores in Los Angeles and sourcing materials from The Home Depot, toy stores and some landfills. We built, styled and decorated the sets between the two of us in my backyard. We lit, shot and built it all. together in one day. “

My favorite is Art, Art, Art – a photograph created with the Big Apple in mind. “It also combines elements that reflect things we value in life, such as music, art, food, culture and, of course, photography.”

Is Aldo a sneakerhead himself? “I wear sneakers 90% of the time and I usually wear classic retro styles, so I think if I could design mine it would be black and white high top sneakers with an iconic symbol on the side. I like funky colorful styles more but more as a visual element for the shoots than for wearing myself. I don’t think I can pull them off! “

Choosing a favorite pair of sneakers, Aldo admits he likes the Nike Cortez or the Nike SB Blazer. But he says it’s harder to pick a favorite decade. “I’m such an eclectic person that I love parts of each of them. I love the mix between the retro world and the modern world.”

Aldo is a photographer born in Mexico City, now based in Los Angeles. His work focuses on portraits, sports, and still lifes, and his clients today include Adidas, Lyft, Red Bull, Spotify, and Gatorade. “I came across photography when I was living in Barcelona,” he says. “I was coming out of college with a business degree and had no idea what I wanted to do with my life. I found a photography internship in Spain where I started carrying cables and just being an assistant on the set. I started to think about things that I would have photographed if I was a photographer and slowly started doing small shots for myself. After a few months I got myself said photographer (I was quite naive), and I haven’t stopped photographing since. “