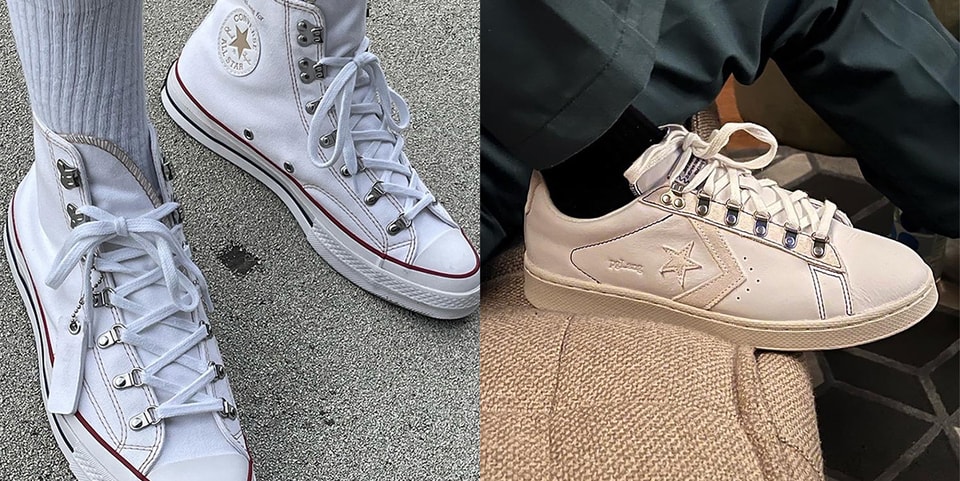 Energy is high around the pgLang camp at the moment as Kendrick Lamar has announced that his fifth studio album titled Mr. Morale and the Big Steppers is set to arrive on May 13, and Baby Keem closed the Coachella stage by bringing him out during his weekend two set. With anticipation looming over this highly anticipated record, Dave Free – the co-founder of the multidisciplinary company – is stirring up even more excitement as he has just teased upcoming pgLang x Converse collaborations.

Free took to Twitter to show off a Converse Chuck Taylor Hi and Pro Leather Ox, both designed in a similar color scheme. The former may look like a traditional white Chuck Taylor Hi from a distance, but up close you’ll notice the eyelets have been changed from the usual circular rings to metallic silver D-rings. In addition, the exposed seams, as well as the One Star logos on the medial side have been tinted with a beige shade, the latter being under the spelling “pgLang for”. The Pro Leathers also feature D-Ring lace loops and dressed in a monochrome look. An off-white hue wraps the shoe from top to bottom, and “pgLang” is stamped on the side panel.

Kendrick Lamar has previously worked with Nike on a Cortez and React Element 55 team, and this marks his first venture with Converse. Stay tuned for more information on this capsule.

In other news, take a look at the Converse Chuck 70 Hi collaboration from Stüssy.