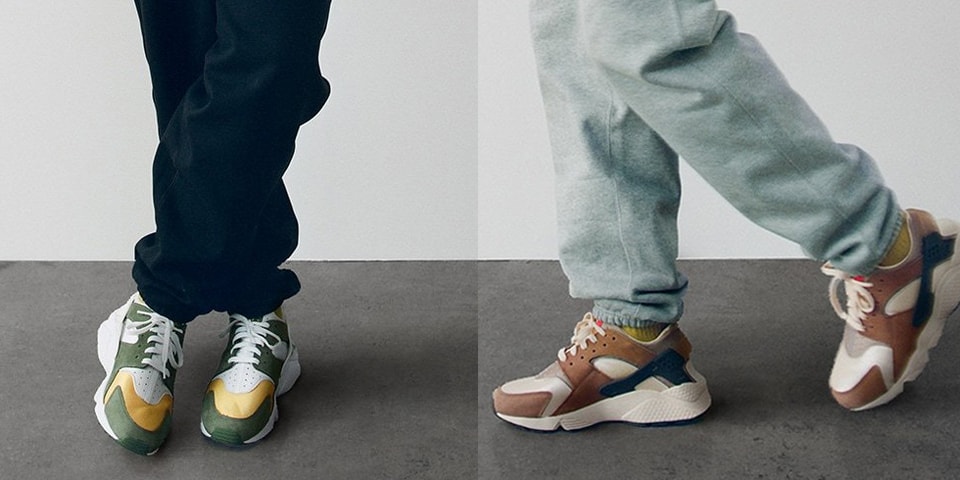 Tinker Hatfield’s Air Huarache LE was first released in 1991, which means this year marks the sneaker’s 30th anniversary. Over the past three decades, the Huarache has been the subject of numerous collaborations, but none had more impact than their redesign by StÃ¼ssy, which gave the pair a redesign in 2000. At the time, they were created as an unofficial collaboration for the brand’s UK Chapter Store by Fraser Cooke of Nike and Michael Koppelman of StÃ¼ssy.

Now, rumors are circulating that the longtime partners could bring back their original Huarache collaboration, after a pair of sneakers appeared in the brand’s spring 2021 lookbook. StÃ¼ssy and Nike had a stellar collaborative release in 2020, offering sneakers such as the StÃ¼ssy x Nike Air Force 1 and Air Zoom Spiridon Cage 2 – so, while at the moment it’s just gossip, bringing back the Huarache seems have a natural feel.

From what we can see in the lookbook, the speculated collaboration would offer a StÃ¼ssy x Nike Air Huarache LE in the 2000 colorways of “Desert Oak / Reed / Light Straw” and “Dark Olive / White / Varsity Maize / Ivory”, served in a blend of suede and neoprene. Like the original pairs, this would be complemented by a chunky air-filled midsole, retro roundel mark on the tongue, and other signature components such as the heel clip. However, the Huarache heads and eagle-eyed among us will notice that the heel clip of the Spring 2021 pair is finished in navy blue, as opposed to the brown-tinted clip of the “Desert Oak” colourway.

The fan favorite sneaker sold instantly in 2000 and has since become one of the most collectable Huaraches. His subsequent collaboration in 2003 saw StÃ¼ssy take on the Nike Air Huarache Light in green and orange, which both go US $ 1,000 in the resale market today – and even more so if you have an all-new first pair with the StÃ¼ssy logo embroidered to the side, which was a first for any Nike collaboration and remains one of the rarest StÃ¼ssy x Nike partnerships ever.

As the Huarache turns 30, there are also rumors that Nike is bringing this style back nonetheless, as is usually the case with other classic pairs. As seen in the StÃ¼ssy Spring 2021 lookbook images above, the pair appear to use OG-style tooling in favor of a more streamlined aesthetic, staying true to the duo’s original collaboration.

So far, we only have rumors. However, if they are right, the return of StÃ¼ssy x Nike Air Huarache LE will surely become one of the first contenders for the sneaker of the year. StÃ¼ssy’s next collection is due out on February 5, while some sites indicate a release on February 12 for the Huarache in “Desert Oak”. Take a look at the sneaker above and stay tuned for more as the news unfolds.

In case you missed it, check out this week’s episode of Sole Mates, in which we spoke with Brendon Babazien from NOAH.