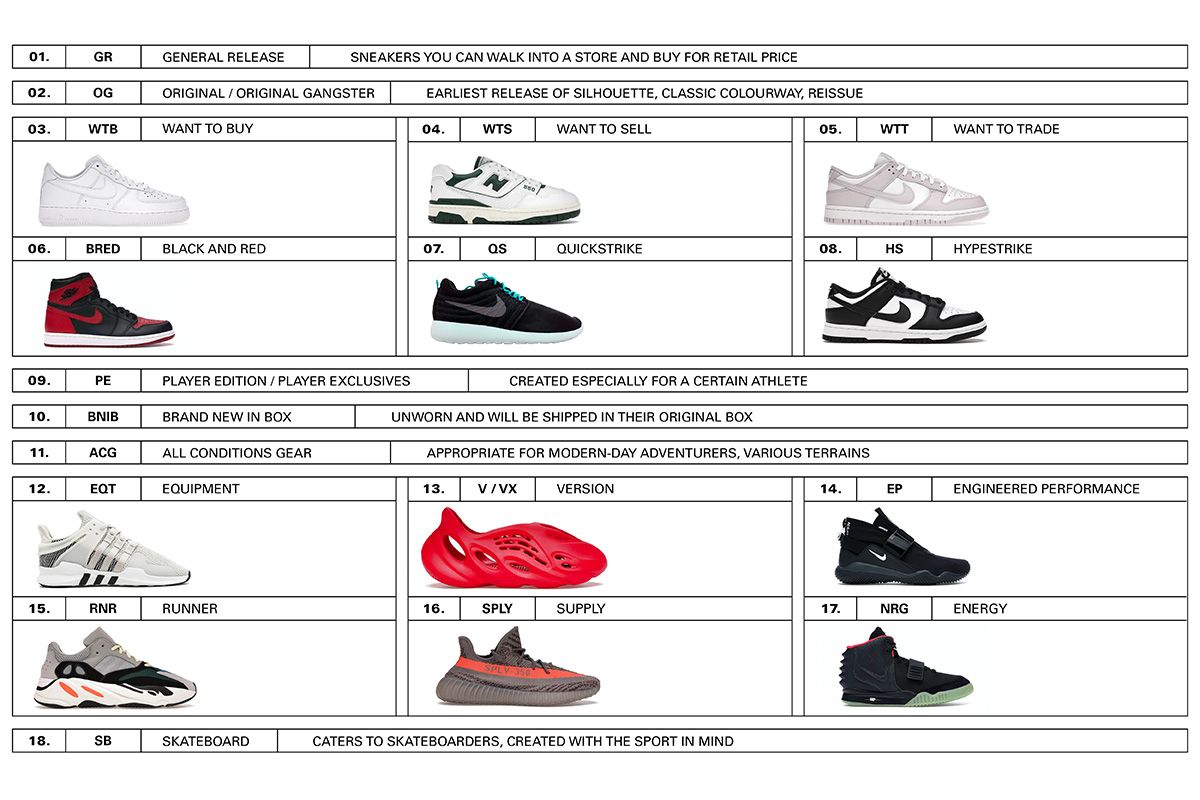 There are so many sneaker terms floating around in the sneaker world that not even the most avid shoe aficionado knows them all. Admittedly, it took us more years than we care to admit to understand the full range.

Where do they come from ? Some are born in sneaker forums, some are concocted by the sportswear brands that create the sneakers, and some are espoused from unlikely subcultures (e.g. OG, an acronym that once exclusively stood for “Original Gangster”, derives Southern California Crips street gangs). With so many sources, it’s no wonder the majority have trouble keeping up.

To help you decode some of the most popular words in sneaker terminology, we have produced a non-alphabetical glossary for your knowledge and enjoyment. Keep reading to equip yourself with the facts you need to travel further into the sneakerverse than ever before.

RG: GR stands for “general version”. GR sneakers are your AF1, adidas Forums, and New Balance 550: the sneakers you can walk into a store and buy at retail. If you want to get very technical, GR can mean any sneaker released to the public, which would include collaborations. But usually when people say GR they mean sneakers that are very widely available.

OG: OG stands for “Original” – although, as mentioned above, it once stood for “Original Gangster”. The term OG can be used to refer to the first version of a silhouette, a classic colorway, or a faithful re-release.

PE: PE stands for “Player Edition” or “Player Exclusives”. Quite simply, it means that the shoe was created specifically for a certain athlete – usually a basketball or American football player. Real PEs are incredibly hard to find, although some PEs have been made public later.

Raised: Bred means “black and red”. Some of the most popular drops in sneaker history have been Bred colorways, including the Yeezy Boost 350 V2 “Bred” and the Jordan 1 High OG “Bred.” The term originated from the Nike Air Jordan line, although as mentioned earlier it was appropriated by sneakerheads for any black and red shoe.

WTB: WTB stands for “Want To Buy”. This abbreviation is used by collectors and hypebeasts who yearn for a specific pair of sneaks. You will most likely find this abbreviation in buy and sell groups.

WST: WTS stands for “Want To Sell”. Needless to say, this abbreviation is commonly used in the resale market by those wishing to part with a pair of kicks.

WTT: WTT stands for “Want To Trade”. Go through a sneaker forum and you’ll probably notice this abbreviation several times, followed by a list of sneakers the person is willing to accept as trades.

BNI: BNIB stands for “Brand New In Box”. Frequent sneaker sellers use this abbreviation to let shoppers know that a particular pair of sneakers are unworn and will be shipped in their original box.

DS: DS stands for “Deadstock”. DS shoes are fresh release pairs that are no longer purchasable outside of the resale market. Similar to GR, the actual meaning of deadstock has changed over the years. This technically means that the sneaker is no longer sold by retailers, but it has been adapted to mean brand new sneakers that have never been worn.

STT: TTS stands for “True to Size”. This abbreviation applies to sneaker models that provide the desired on-foot experience if you purchase them in your exact shoe size.

W: W stands for “Women”. If the name of a sneaker is punctuated with a W, it is essential that you remember to opt for your women’s size, and not your men’s size, when purchasing the shoe.

PS: PS stands for “preschool”. PS sizes are generally smaller than GS sizes because they are produced for young children.

TD: TD stands for “toddler”. There is usually some overlap between TD sizes and GS sizes, but TD sneakers generally come in smaller sizes.

SB: SB stands for “Skateboard”. It goes without saying that the Nike SB line is aimed at skateboarders. Every silhouette – from the Nike SB Dunk to the Nike SB Janoski – is created with sport in mind.

PMR: PRM stands for “Premium”. Nike’s PRM sneakers are a cut above the GRs, normally because they’re made from high-quality materials and adorned with intricate detailing.

SP: SP stands for “Special Project”. If SP is named after a Nike sneaker, the shoe is traditionally constructed from premium materials, created by the NikeLab team or is the result of a collaboration.

QS: QS stands for “Quickstrike”. If QS is incorporated into a Swoosh sneaker’s name, the shoe will be released — or has been released — in limited quantities. With that in mind, sneakerheads will need to think fast and act fast when trying to get their hands on a pair of QS kicks.

SH: HS stands for “Hyperstrike”. HS sneakers are rarer than QS sneakers and therefore can only be found at Nike.

PE: EP is short for “Engineered Performance”. The sneakers that fall under the EP umbrella are made with a practical and ultra-durable rubber; Therefore, the Nike EP kicks are ideal for those with an affinity for the great outdoors.

GCA: ACG stands for “All Conditions Gear”. Introduced in 1991, the acronym ACG describes sneakers – and apparel, for that matter – suitable for modern-day adventurers who tread a variety of terrains.

HTML: HTM stands for “Hiroshi, Tinker and Mark” (Fujiwara, Hatfield and Parker, respectively). The illustrious HTM trio are known for combining their skills, knowledge and imagination to dream up new Nike sneakers and elevate classic Swoosh-adorned silhouettes. Naturally, they do so for the sake of innovation.

EQT: EQT stands for “Equipment”. The Three Stripes terminology was first used in 1991 to describe sneakers that followed the principle of form and function, such as the EQT Support and the EQT Cushion.

V: V stands for “Version”. V1 refers to the first version of a silhouette, V2 refers to the second version, and so on. One can expect to come across this particular abbreviation when purchasing the ever-expanding adidas Yeezy range.

NSLTD: NSLTD stands for “isolated”. As of this writing, this particular abbreviation is only used to describe one adidas Yeezy silhouette: the divisive Yeezy NSLTD BT. Rightly so, they look super warm and cozy.

RNNR and RNR: RNNR, or RNR, stands for “Runner”. Until now, the terminology has been exclusively used by adidas Yeezy to label lifestyle silhouettes – including the Yeezy Foam RNNR and Yeezy Knit RNR – that are perfect for slipping on for runs.

SPLY: SPLY stands for “Supply”. Followers of adidas Yeezy will be familiar with this terminology as “SPLY-350” graces the sidewall of sought-after Yeezy Boost 350 V2 colorways such as “Beluga”, “Zebra”, and “Semi Frozen Yellow”.

MX and MXT: Although this remains to be confirmed, it seems that MX and MXT stand for “Mix” and “Mixed”. These terminologies are associated with adidas Yeezy colorways which are characterized by their swirling aesthetic – patterns reminiscent of marble or swirling paint.

WACC: CMPCT – another ambiguous adidas Yeezy sneaker terminology – presumably stands for “Compact”. If so, the recently launched Yeezy Boost 350 V2 CMPCT is named for its sock-like fit or the fact that it packs away easily thanks to its flexible and unstructured design.

Colin Kaepernick still wants to play. Does he really stand a chance?